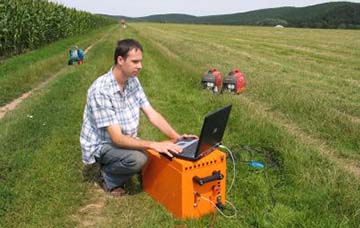 Geoelectric Power Sounder GEPS-2000 is a device for data acquisition and interpretation of deep VES (vertical electrical sounding) as well as for 8 channel profiling (resistivity and IP sections). It can be used for measurements up to 1000 – 2000 m depth allowing both high voltage and high current injection of transmitter current according to real measuring conditions.

The device consists of powerfull, overload protected transmitter supplied from two portable electric generators (with total power of 4000 W) and of detachable receiver. The operation is provided from a user’s laptop.

GEPS-2000 is a made-to-order device its features can be modified.

Measured data from GEPS-2000 acquired from several VES can be assembled into resistivity and IP sections using the interpretation software delivered with the device. Data output from 8 channel profiling is matched with RES2DINV inversion software.